Johnson Hana raises €10.5 million as it transforms the legal services market it has already disrupted

As has been widely reported, Johnson Hana has recently completed a funding round raising €10.5 million from investors led by AIB (one of Ireland’s largest banks).

This funding round brings the total raised by Johnson Hana since its inception to over €15 million.

As our CEO, Dan Fox, announced:

“That fact is that this is the largest fundraise within the legal marketplace (by an ALSP or otherwise) in the history of the Irish state.

And the fact that the investment is being led by AIB, one of Ireland’s largest banks and a pillar of the business and financial services sector, is newsworthy because it sounds a resounding note of approval for the ALSP model.”

Below we look at why this is big news, not just for the legal services market in Ireland, but internationally as well. 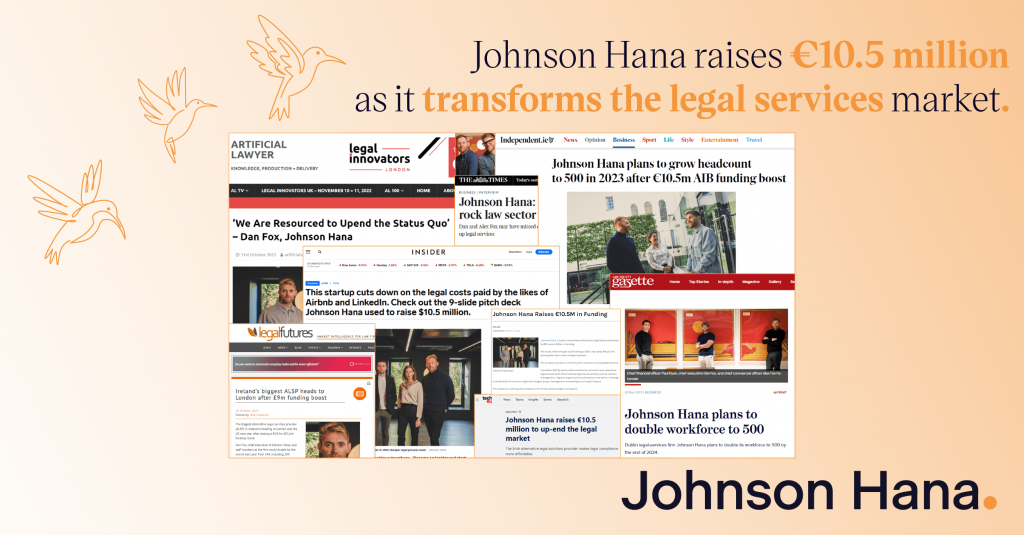 To explain what is changing, we must first look at how legal services have worked historically.

Until recently, law firms held a monopoly on all legal work, with the majority of corporate work being concentrated in the hands of just a few behemoth law firms.

This market (or lack thereof) meant clients were required to acquiesce to opaque billing structures, high prices, and little transparency in the process of how the work was being done. This is because all legal work was treated as though it were complex legal advice, regardless of whether what was actually being carried out was simple legal process work.

What is legal process work?

Legal process work is what underpins the general operations of any business. It includes day-to-day obligations such as complying with Data Subject Access Requests (DSARs) and other Data Protection regulations, general commercial contracting and regulatory compliance matters.

It also includes a broad swathe of the paperwork that supports the legal advisory work in more complex matters such as mergers and acquisitions, and discovery and litigation support.

What unites these is that the work being done does not require a legal decision (that would be legal advice) rather that it follows a directive either written in legislation or given by an advisory lawyer.

What is the alternative?

As is indicated by their name, Alternative Legal Service Providers (ALSPs) offer a more efficient alternative to traditional law firms.

However, that title is somewhat misleading, as ALSP adoption has become so widespread that “ALSPs” are now more-or-less mainstream, though the title remains. (Much as it does when discussions of streaming services are referred to as “alternatives” to broadcast television, despite the fact that they have the largest overall viewership figures.)

In fact a 2021 report by Thomson Reuters found that “79% of law firms and 71% of corporations using ALSPs” in the U.S., and those numbers have almost certainly increased since and would have seen even greater growth in Ireland and the U.K.

What are the benefits of ALSPs?

Principally, the benefit of ALSPs is that they focus purely on legal process work and can therefore offer that work done to a higher quality, in a more transparent way, and at a lower cost for clients.

For example, say a large company has a significant contract repapering exercise to complete, a traditional law firm would accept the project, and park it with a team of associates who would comb through the required documentation and then issue an invoice with a vague “billable hours” total.

An ALSP, on the other hand, would tender for the work with a breakdown of how the work would be completed, including a full breakdown of costs and an estimated completion timescale. After the work got underway, the client would then have access to a dashboard showing project progress, and accurate forecasts of completion time remaining and final cost totals, updated to reflect any fluid changes in scope.

In both instances, the work is being done by expert lawyers, but the machinery surrounding that expertise is vastly different. And, because the advisory element is removed, the total cost to the client falls by an average of 50%.

This is not to down-play the importance of the legal advisory work that traditional law firms do so well. As we discussed in our article on how we work with law firms, what we do is complementary to what they do, and we therefore often share a mutually beneficial relationship, with law firms handling the advice while we undertake the process work that sits beneath.

How is this affecting the legal services market?

This brings us back to the announcement of our fundraise, and why it is so important to the legal services market in general.

As was reported in the Irish Independent, Johnson Hana is “disrupting the legal market”.

Due to the reasons listed above, this disruption was almost inevitable, and Johnson Hana were simply the first (and currently only) ALSP in Ireland.

The significance of the fundraise, as the article says, is that Johnson Hana “getting the backing from AIB would allow it to accelerate its growth plan.”

In other words, Johnson Hana’s growth as an ALSP was always going to be a success story. What this fundraise does is supercharge that growth by allowing expansion into other markets such as the U.S. and U.K. Both to serve clients domestically there as well as guide them on their business in Ireland.

As Dan Fox told Business Insider, “We are seeing a huge paradigm shift in the way companies want to be serviced from a legal perspective, our clients are fast-paced businesses and need heavy volume legal processes handled at speed and with precision.”

The capital injection allows us to scale our infrastructure, going bigger in terms of both legal consultants and head count staff, and the impact of that for clients is a broader service range that meets them where they are, and builds towards their precise needs.

As Johnson Hana’s Managing Director of Legal Operations & Solutions put it: “Demand for our services is accelerating, and investing now in the breadth and scale of the team means that we prevent any shortfalls. Simply put, it allows us to keep up with the work, without having to lower our high standards.”

So, what’s next for Johnson Hana? “Well, we become the biggest ALSP in the world” grins Dan “but first we might need a bigger office.” He says, noting that the company is already outgrowing the new offices it moved into less than a year ago.

To find out more about our services, let us know and we’ll arrange a call at a time that suits you.